The world’s most famous mausoleum

The Taj Mahal is an immense mausoleum of white marble, built in Agra, India, between 1631 and 1648 by order of the emperor Shah Jahan in memory of his favourite wife, Mumtaz Mahal.

Shahab-ud-din Muhammad Khurram – better known as Shah Jahan (meaning ‘King of the World’ in Persian) – was a Mughal emperor who reigned from 1628 to 1658. He commissioned the construction of the Taj Mahal in fulfilment of a promise he made to Mumtaz Mahal as she lay on her deathbed: to erect a monument to match her beauty. Following his own death in 1666, Shaj Jahan was entombed beside his wife in the mausoleum.

The Taj Mahal is located on the right bank of the Yamuna River in a garden that encompasses nearly 42 acres. For its construction, masons, stone-cutters, inlayers, carvers, painters, calligraphers, dome builders and other artisans were requisitioned from the whole of the Mughal empire and beyond. Ustad-Ahmad Lahori was the main architect of the Taj Mahal.

Placing the building at one end of the rectangular garden – rather than in the centre, as was typical at the time – added an exceptional degree of depth and perspective to the arriving visitor’s view of the mausoleum.

Unesco’s assessment of this World Heritage Site says, “Taj Mahal represents the finest architectural and artistic achievement through perfect harmony and excellent craftsmanship in a whole range of Indo-Islamic sepulchral architecture. It is a masterpiece of architectural style in conception, treatment and execution and has unique aesthetic qualities in balance, symmetry and harmonious blending of various elements.”

The whole set of buildings in the Taj Mahal complex was completed in 1653. The complex is bordered on three sides by crenellated red sandstone walls; the side facing the river is open. Outside the walls are several additional mausoleums, including those of Shah Jahan’s other wives, and a larger tomb for Mumtaz’s favourite servant.

The main mausoleum is framed by four marble minarets, each more than 130 feet tall.

To the south of the mausoleum, beyond the rectangular gardens, the Great Gate (Darwaza-i rauza) is a monumental structure built primarily of marble. Two grand red sandstone buildings face the sides of the mausoleum. The western structure is a mosque and the other – shown in the photograph above – is the almost identical jawab (answer), thought to have been constructed purely for architectural balance, although it may have been used as a guesthouse.

Who was Mumtaz Mahal?

Arjumand Banu Begum was born in Agra in 1593. She was the daughter of a wealthy Persian nobleman whose impoverished family had come to India in 1577, when his father was taken into the service of the third Mughal emperor, Akbar the Great.

Talented and cultured, she was said to have possessed “a rare combination of modesty and candour” and to have been “a woman warmly straightforward yet bemusedly self-possessed.”

Arjumand Begum was married to Shah Jahan when she was 19 years old and he was 20. After their wedding celebrations, her husband, “finding her in appearance and character elect among all the women of the time,” gave her the title ‘Mumtaz Mahal’ Begum – ‘the Exalted One of the Palace’.

Mumtaz Mahal died in 1631 while giving birth to her fourteenth child.

The splendour of the mausoleum

With its riverside setting and the channels and central pool in the garden, the mausoleum’s magnificence is enhanced by the beauty of water. 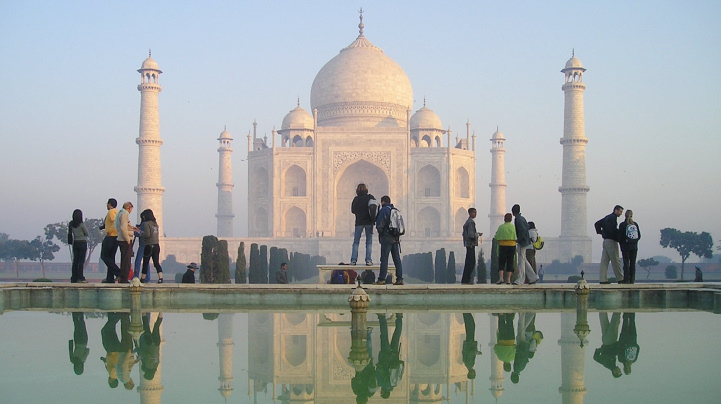 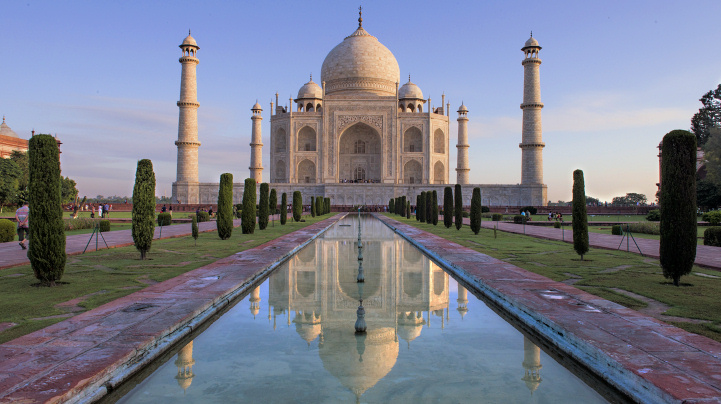 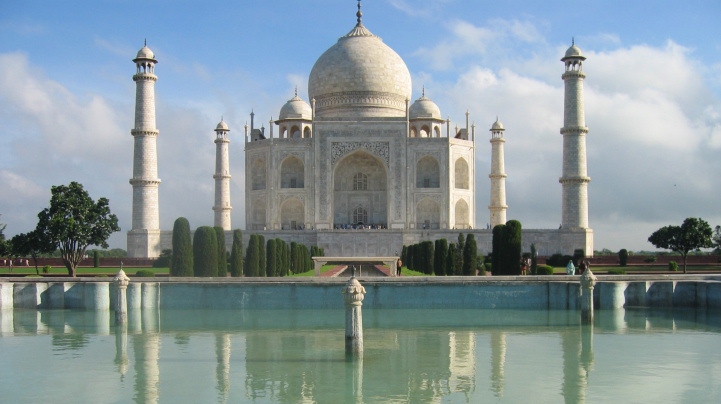 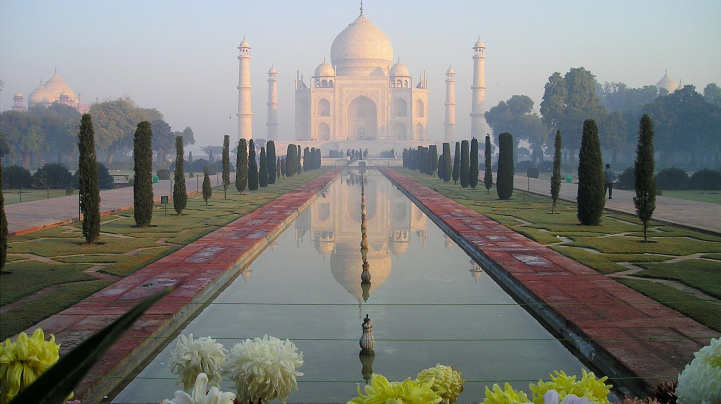 Formal gardens and a

The mausoleum’s ‘gardens of paradise’ are traversed by raised pathways. The charbagh design was inspired by Persian gardens, and was introduced to India by the first Mughal emperor. The gardens are quadrilaterally divided by water channels that meet at the centre, where a ‘celestial pool of abundance’ – al Hawd al-Kawthar – serves as a reflective focal point.

A marble mausoleum beside

‘a river of paradise’

The mausoleum overlooks one of the many bends in the Yamuna, the longest tributary of the Ganges. With the discovery of a ‘Moonlight Garden’ on the other side of the river, the Archaeological Survey of India has suggested that the Yamuna itself was incorporated into the garden’s design and was intended to be seen as one of the rivers of Paradise.

The Taj Mahal is situated in the northern state of Uttar Pradesh, which has over 200 million inhabitants. It is 138 miles by road from the Indian capital New Delhi.

The name Taj Mahal means ‘Crown of the Palace’. The construction of the complex took more than 20 years and cost around a billion dollars in today’s money.

It is believed that over 1,000 elephants were used to transport the building materials, which included jade from China, turquoise from Tibet and Lapis lazuli from Afghanistan.

Further reading and viewing (and the main sources for the article above): Unesco’s World Heritage listing for the Taj Mahal (CC‑BY‑SA IGO 3.0), Wikipedia’s pages on the Taj Mahal and Mumtaz Mahal, and the educational resource Explore the Taj Mahal. See also the BBC News story ‘Twilight of the Taj’, which suggests that the combined effects of pollution and prolonged neglect are threatening the very existence of this monumental icon.

All photographs on this page have been released into the public domain (CC0).